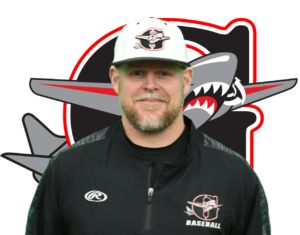 Aaron is a Chattahoochee High School graduate (98’) where he was a four year lettermen having played for current CHS head coach, Tim Lemons. Aaron was drafted as a catcher in 1998 by the Florida Marlins.  Before playing four seasons in the Florida Marlins organization (1999-2002), Aaron took a year to play collegiate baseball at Middle Georgia College under Coach Craig Young and winning the 1999 JUCO Georgia Conference Championship.

Aaron started his coaching career in 2003 where he was an assistant at Chattahoochee HS for three seasons. In 2005, Aaron helped coach Chattahoochee to the AAAAA State Championship while going 33-4 on the season. He also coached the East Cobb Cardinals 17U/18U from 2004-2007 then with Team Georgia Baseball Academy from 2008-2015. In addition to coaching 13U-16U teams in his six years with TGBA, Aaron also served as the Head of Player Development of the 9U-13U age groups for TGBA from 2012-2015. In 2014 Aaron and Doug Livingston took their TGBA 16U team to a 49-8 record, finishing up as CABA World Series Runner-Up.

Aaron has coached numerous players who have gone on to play college baseball, 25+ that have played or are currently playing professional baseball and has two former players who made it to the Major Leagues, Dominic Brown (Philadelphia Phillies) and Billy Burns (Oakland Athletics).

Aaron Alvarez is also owner of Grand Slam Sports Center in Alpharetta / Johns Creek, GA where his main focus of development is with Hitters and Catchers. Aaron is a true believer in keeping the development of players as the priority which will lead to success/winning on the competitive ball field.

Aaron purchased GSSC in 2007 and has had 11 successful years serving the young players who come to us for development.