Hugh joins Georgia Bombers Baseball from California where he has coached in Manhattan Beach, CA for the past 10 years. Hugh has been coaching out in California with the Garciaparra Baseball Group and founded www.SportSwat.com, an online workout program specified for baseball players.

Hugh was a two sport athlete in at Amherst College where he played baseball and basketball. In 1998, Hugh was invited to play in the infamous Cape Cod League where he played for the Bourne Braves. Hugh was drafted by the Detroit Tigers and played four seasons in the minor leagues between the Tigers and Orioles.

Hugh is married to his wife, Whitney and they have two sons, Broxon and Hayes.

Fact: Hugh’s biggest claim to fame is sharing a Topps Rookie Card with Edwin Encarnacion. Its been said that Edwin is disappointed that he isn’t sharing the card with someone better or at least someone with a less ridiculous last name! 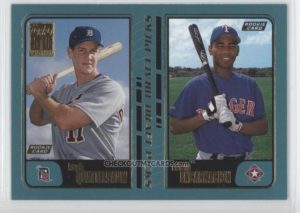